Below is the comic.
I’m also mentioning some thoughts on Netflix Movies and specifically,
“Bird Box” (No true spoilers)*
*Scroll below the comic for my thoughts. 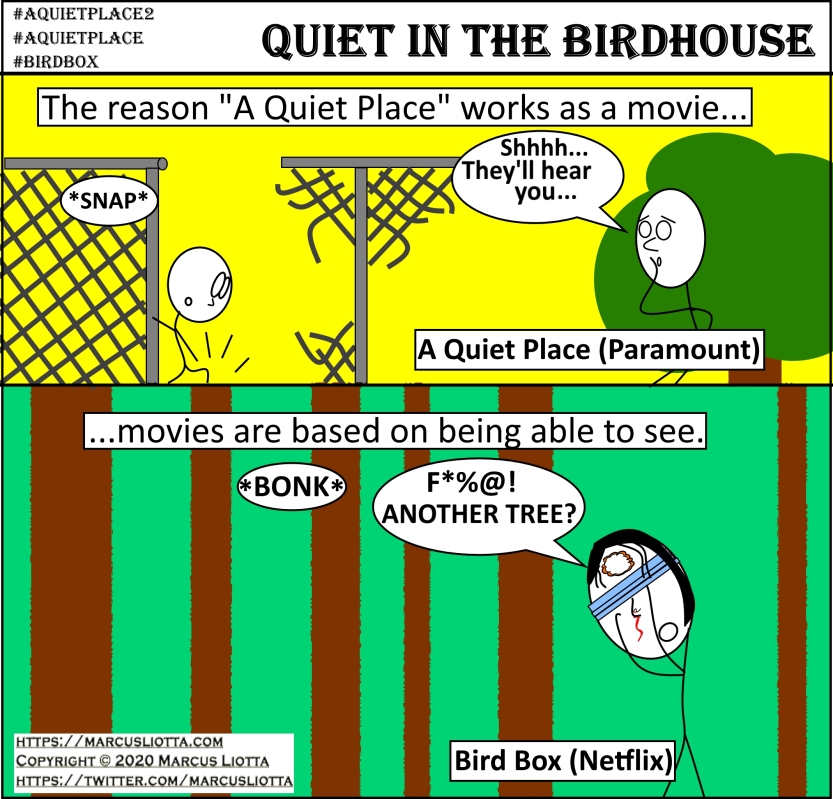 In watching both “A Quiet Place” and “Bird Box“, a nagging sensation kept pestering me until finally, I drew this comic.

“Bird Box” though written earlier has very similar structure, seemingly made by Netflix to boost popularity (yes, the Netflix “Bird Box” film pulls in viewers of “A Quiet Place” by using similar mechanics, a similar story, remarkably timed to release shortly after the actual in-theaters movie “A Quiet Place” had it’s run in theaters.)

There are many flaws with Netflix movies in general that I’ve noticed – namely a lack of solid and full-filling endings.
Some Netflix movies are very good, enjoyable, and have a great Overall Plot (story), and yet sadly still always seem to suffer the same failure during their last act. I suspect Netflix production crews are rushed by the ending segments and have a push to complete which unfortunately ruins some films entirely.

This move, “Bird Box“, was received with wide acclaim but unfortunately had significant issues in multiple areas of filmography. Honestly, from the first trailer of it, these seemed mostly quite apparent.

1-Time Jumps shredded all presumption of suspense.
Characters who we already know are not in the picture anymore suddenly suffering an untimely end or other referenced fate makes characters very 2-dimensional and meaningless.
Don’t give away fate of a character as suddenly that character we know will generally live or die, and that removes any fear of their imminent demise earlier on.
If we know a character lives, why would we worry when they are stabbed or attacked, they’ll clearly get through it. *This is ironically why prequel movies tend to be bad as well.

2- Unsatisfactory ending.
Nothing is resolved, meaning the characters essentially are in a similar situation as when they began. There is a suggestion of peace and safety which makes little sense when one thinks about it more than a few second.

3-Keeping the audience Blind.
There are moments where because of the mechanics behind “Bird Box,” whereby seeing the monsters will do ‘bad stuff’, we the viewers are placed directly into a blindfold with the main character.
This does not help to spur fear or concern for the characters, but rather, causes confusion among viewers. It also proves that these character in fact cannot easily wander around in the middle of a forest without sight – especially having not done so much in the past (at least, not previously practicing in ways the viewer can confirm.)

Overall I was very dissatisfied with “Bird Box” as it was designed poorly as a film, generally speaking. There is another movie which is a much more direct rip-off of
“A Quiet Place” on Netflix which, ironically, I felt was not bad relatively speaking.

Sandra Bullock does do a decent job in her role, with what she has, and really the acting and effects overall were very well done.
The problems stem solely from Script, Story, and poor Plot devices.

Hopefully authors and screenwriters can learn from the obvious mistakes “Bird Box” made.