I have a habit of checking out less popular movies at the dollar movie theater long after they are released. This said, I was absolutely shocked by my crew’s recent experience, namely snoring to “A Wrinkle In Time.”

First of all, though this movie is rated PG, let me be frank, NO CHILD SHOULD WATCH THIS. In it many adult themes intersect and quite frankly I couldn’t believe they didn’t make it PG-13 based on the constant adult themes (meaning, they were beyond children comprehension in most cases, not that they were actually harmful for children to watch… well, usually.)

I probably should have looked up the reviews before I agreed to see it.

The book, when I read it many years ago, was good. Enjoyed it And if you want to grab a copy, you can get it here on amazon: [A Wrinkle In Time (e-book)]

The problem is, the movie was simply terrible. From political statements pushed into the movie (non-relevant to the story), to character interactions failing at holding a viewer’s attention, this entire movie spawned concern from the very moment it started.

For example, before it began the director Ava DuVernay spoke directly to the audience while a behind-the-scenes footage rolled. She thanked her team and all of those involved… while showing hints at what might be witnessed half-way through the feature film.

I think the audience agrees with me here, given the IMDB score is barely better than rotten tomatoes:

Every scene transition was horrid, espousing to nothing more than an abrupt change in scenery to give an audience the illusion of purpose and forward momentum. The characters may as well have read their lines in a single barren room, for none of the visuals even mattered.

Apparently Disney did make their money back from this foul creation, although I daresay they likely made less than anticipated.

At the very end of the movie, the main character Meg literally looks at the screen and whispers “thank you.” I assumed this was Disney thanking the audience for their money, because it seemed completely out of place in the movie.

THE SUMMARY OF FAULTS

Let me give the breakdown, which, WARNING may contain some spoilers (but you already knew that, didn’t you 😉

Oprah may as well have played herself, a commanding (demanding) woman who was larger than everyone else! (No really, they made her a giant.)
The Mrs Whatsit, Who, and Which were all dressed in substantial makeup which resembled that of a clown.
Beyond this skin-deep facade, their incoherent diatribes made every moment the three penetrated a scene simply excruciating. The three Mrs’ seemingly did their best to be horrible characters the entire time.
Worse yet, during the “epic battle” ending, Oprah tells the others “we won” as if this could not be deciphered by an audience.
Personally, I could see the writer’s/director’s concern being valid. I was quite frankly confused by how anyone seemingly won when the entire ordeal still seemed nothing short of a nightmare. Even having read the book, I suddenly expected the Mrs’ to become villains. That should say quite a bit about their flawed acting or character development.
Bring it.
M. Night Shyamalan  me!
I mean, come on, these three clowns (I mean, women, *ahem*) show up right after the main character Meg instructs her younger adopted brother not to speak with strangers.
Then, all of a sudden, Meg trusts them completely and goes on a less-than-wild adventure with no apparent purpose. That comes to my next point…

Dragged Along for the Ride

The kids, who are all main protagonists, they were equally strung along and told what to do at every turn. What could possibly be more interesting than watching a genius child do as he is told at every moment?
Exactly.
‘Go here, Do that, Say this’, doesn’t strike me as very intelligent. This unfortunately is one of the major problems with the film.
No independent thought by any of the characters.
Each always turned to someone else before they could do anything at all.

Times when emotion was supposed to be felt were also painful to view, as none of it was believable. No one on screen actually appeared to care for one another at all, given their history of interactions.

The term “Charles Wallace” (little genius boy) was spoken so many times, everyone who went with me noticed (easily once per minute.)
This may as well be the new “How Rude” famously coined by Jar Jar Binks of Star Wars the Phantom Menace.

“Meg” fell unconscious quite a bit while everyone else was no worse for wear zipping across the universe in a state similar to that of “Sliders” (old SciFi TV series.)
Though this was explained, at the same time I found their explanation very limited and lacking. Essentially, because she had some form of evil in her, she kept blacking out. This combined with the person sleeping in the seat next to me made for an interesting conundrum. How in fact did I survive?

Finally the last point I’d like to make. Calvin… O’ boy.  And by that I mean, Levi Miller who played “Calvin O’Keefe” (see the boy below.) 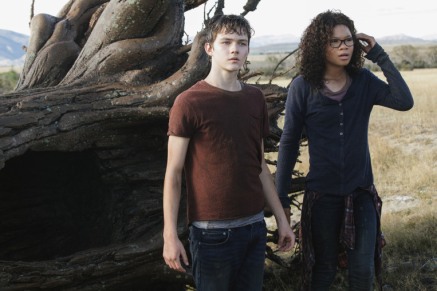 Now maybe I am just nit-picking at this point, however, at the end of the movie I realized a very startling truth. There was no purpose for this character beyond being a love interest for Meg. He always smiled with a lost expression which more or less said “I have no idea why I am here, but hey, you should like kiss me later.”

His tag-along essentially changed nothing and in the end only two major actions occurred by his being there. He ate a sandwich, and not long after fell asleep (unconscious.)

Well, I do hope these details were a pleasant read, feel free to comment on what you thought of the movie or book or share at your heart’s content.

If you want to grab a copy of the book (since the movie isn’t worthwhile), you can get it on amazon: [A Wrinkle In Time (e-book)]

AUTHOR’s NOTICE: We are a participant in the Amazon Services LLC Associates Program, an affiliate advertising program designed to provide a means for us to earn fees by linking to Amazon.com and affiliated sites.